PcVue on the road with the Paris Marathon ! 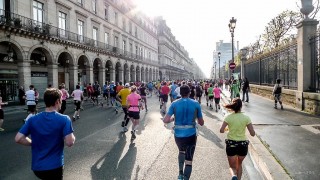 With 60 000 registered participants, the 2019 edition of the Paris Marathon becomes the 2nd largest marathon worldwide behind New York. Runners from more than 145 countries are expected to try and go the distance, 42 195 km to be exact, from the Champs-Elysées to Avenue Foch.

This year, the race sponsored by Schneider Electric endeavors to advocate environmentally friendly values by being the first carbon-neutral marathon, compensating its carbon credits through a charity program in Kenya.

Beside the ecofriendly initiative and the sporting achievement, the marathon is also the opportunity for runners to explore the French capital and its landmarks.

From national opera houses to the Eiffel Tower, PcVue Solutions has been involved in the management of many Parisian sites featured in the marathon. Let’s take a tour of the race itinerary with PcVue!

After starting on Champs-Elysées, then passing before the Egyptian Obelisk on the Place de la Concorde, all the way to Palais Garnier on kilometer 3, marathoners will reach the Louvre on Rivoli street. The most visited museum worldwide also possesses its own Louvre Business center and an Antique Dealers’ office, both managed by PcVue for BMS.

Between kilometers 6 and 7, the course will pass through Place de la Bastille, facing Bastille Opera, now the National Paris Opera, dedicated to high-end artistic representations. The entire building is monitored by 13 PcVue licenses, from stage lighting to air-conditioning management.

The runners will then leave the concrete ground for the green tracks of Bois de Vincennes for 9 kilometers, before returning to the city walls on the symbolic 20 kilometers mark. The final route follows the right bank of the Seine River, offering a view over the Notre-Dame Cathedral and the Louvre Museum again.

After kilometer 29, on the other side of the Seine, participants will run by the Quai Branly - Jacques Chirac Museum whose BMS is ensured by PcVue. Dedicated to non-European civilizations, it welcomes more than 1.5 million visitors each year.

Kilometer 30 marks the arrival in the heart of the city and its Eiffel Tower. The 320 meters high and 10 100 tons heavy giant is the most-visited paid monument in the world. All of the Lady of Iron’s equipment, from lighting to elevators, are monitored by 9 PcVue stations.

Then heading north towards the Louis Vuitton Foundation on kilometer 39. The cloud shaped building was built by American architect Franck Gehry and houses contemporary art collections. The premise is managed by a complex hypervision in which PcVue handles the control of the fountain, plumbing and high voltage. The SCADA system entails 4 redundant PcVue servers, 4 client stations and a remote web access via 25 WebVue licenses.

After this last step, only three kilometers left before the finish line Avenue Foch. The end of a journey in the heart of Paris, a city with a strong history to pay witness to, that is, if you had time to catch your breath and watch…